Let’s talk about pain or, in this case, the lack thereof, thanks to Grey Team’s HAELO Therapy. As a 59-year-old Navy veteran with multiple injury diagnoses and even more pain relief medications prescribed by the VA…

Alex Martinez looked over his Air Force dress blues, the uniform he wore when he graduated from boot camp. He touched his insignia – a circle with a star in the center and a striped wing flaring from either side – that signified his rank of airman second class.

The U.S. Air Force will award a special tactics combat controller the second-highest military award for calling in danger-close gunship airstrikes while under siege in Afghanistan.

As an example of how Americans pull together during a crisis in our country, we present to you the story of Danny O’Neel. This story was original written by Matt Fratus | September 10, 2020

Danny O’Neel served in the US Army from 2001 to 2008. He deployed twice to Iraq, most notably serving as a squad leader and forward observer in Sadr City. Nine of his soldiers were killed in Iraq and another 15 committed suicide when they returned. O’Neel’s mission today is serving as a peer mentor to other veterans at Project Healing Heroes as well as an ambassador for numerous surf therapy organizations. O’Neel, alongside his wife, Faun, are also Dole Fellows at the Elizabeth Dole Foundation, which empowers the caregivers of military service members.

“On 9/11 I was working for a highway construction company in Livermore, California. Normally I watched music videos on MTV while getting ready for work and I saw all the channels showing the World Trade Center on fire. I watched the second plane crash into the building. I sat in disbelief, and after a few minutes I called my boss to quit, informing him I was joining the military. While it was an impulsive decision, it was one of the best choices of my life. “That morning as I sat on my bed watching the events unfold, I knew I had to do something. I was young, in shape, motivated, and feeling patriotic. I actually called the Marine Corps office several times thinking I know these guys get up early, where the hell are they? I found out later they had to go to MEPS for a safety briefing since the attack raised the threat level, and the other was on leave. It led to me calling the Army and talking with Corporal Thatcher. He asked if I knew what happened just to be sure I knew what I was getting into. I had no clue.

“When I first joined the Army I volunteered for every school, starting with airborne, then Ranger Indoctrination Program, and Air Assault. I wanted to be the best trained Soldier I could be and to meet the enemy as swiftly as possible. While my career path didn’t go how I envisioned, I was leading other men after 17 months in.

“I didn’t take the responsibility lightly, and tried to train my guys so that they could survive any environment. As a squad leader in war, you are directly responsible for the orders given to the men fighting, while you show them by example. It is the greatest honor bestowed upon a leader. While preparing for another deployment I was told I needed to go to mental health.

“The Army decided I was unable to perform in combat effectively, and I separated. I was angry and bitter for a while, because I thought I was ok. But I needed help, which I eventually got. I use my position as a leader to get others to reach out for help now. We were the most united country after that day, so I work to get back to that America.

“9/11 has impacted me every day since then. It changed the direction of my life, and continues to lead me to serve today. Despite the attack, I was so proud of our response, and the unity we showed as a nation. I had never felt a love for my country like I did that day and the following days. I have been to the 9/11 museum twice. I’m drawn to the people who died there, and want them to know that many people stood up for them. We may not be the greatest generation, but we are the greatest of our generation. When our nation needed us, we showed up in droves, and that makes me proud. September 11th reminds me of our resilience and ability to unify. We could use a little of both right now.”

The culture shock of coming home from the ship and having to relearn how to be a part of society.

The moments you spend re-examining yourself in the mirror because you forgot what you really looked like out of the uniform.

The bruises, cuts and scars from working in the harshest environments and conditions.

Wearing normal clothes is the most comfortable feeling on earth. Even the jeans you barely fit into anymore. 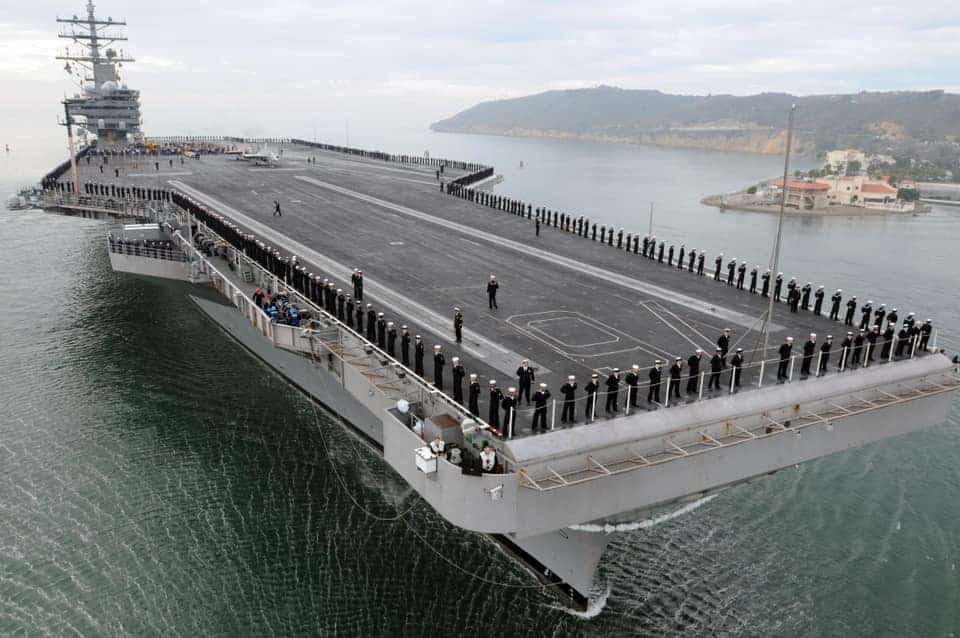 Getting sick every time you come home because you are able to eat civilized food again and drink your favorite drinks.

Getting dressed with the lights on.

Amazed at how you lose so much weight without trying.

Having to sleep with a fan on because the room you are in now is too silent.

Suddenly being thankful for literally everything you own and experience in a normal day.

Showering without shoes on.

The water is a normal hot, and doesnt switch to ice cubes then to burning steam before losing pressure. And no water rationing hours!

Folding laundry while sitting on the bed.

Not being able to sleep because we are catching jets and you have to make sure that you hear them catch the wire… retract. The pilot is safe.

Not being able to sleep because youre no longer in rough seas. The bed is still and the room isnt moving. Its quiet.

Man overboard. They didn’t say it was a drill this time. Everyone gets to their stations a little quicker to make sure their guys are good.

You probably don’t notice how often you hit your head anymore.

“Medical emergency in compartment…” silence. Do I know anyone in that compartment? I hope they are okay, nothing major.

I don’t remember the last time I was alone in a room for more than 10 minutes.

Fire, Fire, Fire!…. These things are always catching on fire.

Coming home in a different season. The grass is green now. They harvested all the corn fields.

Oh! She had her baby, bless her heart.

Wow. It’s been years…where was I?

Coming home from all of this is going to be so hard yet so easy.